Plan S: An open-access initiative that is transforming the face of global research

In September 2018, a prominent group of research funders made a bold commitment, requiring scientists they fund to publish their peer-reviewed papers outside of journal paywalls. The initiative, called Plan S, requires scientists supported by participating research funders to publish exclusively in journals that provide immediate, full open access to their work. Following this, a global discussion erupted, with stakeholders debating on who has the right to access publicly financed research? Would it ever be possible to bring change to a multibillion-dollar market, dominated by few players?

Plan S drew immediate criticism due to its stated goal of abolishing journal subscription methods. Its planned launch date got delayed from 2020 to 2021 to incorporate stakeholder inputs. However, after significant debate over the policy, the project got underway in 2021, with 26 funding bodies implementing similar open-access (OA) requirements.

Supported by cOAlition S, a group of national research funding organizations and charitable foundations, Plan S requires that, effective 2021, all scholarly publications based on the results from research funded by public or private grants from national, regional, and international research councils and funding bodies, be published in open access journals, on open access platforms, or made immediately accessible via Open Access Repositories without embargo.

In 2021, cOAlition S expanded its worldwide reach with the addition of two new members: the Québec Research Funds (QRF) and the Foundation for Science and Technology of Portugal (FCT).

The Québec Research Funds is the first North American public funding agency to join Plan S. The agency accounts for about a quarter of Canada’s scientific community and contributed $253 million to research funding in 2019-2020. The QRF will integrate its Open Access Policy with Plan S, requiring that all QRF-funded research be made open access at the time of publication, beginning March 2023.

The Foundation for Science and Technology of Portugal (FCT) oversees around €500 million in research funds each year to ensure that scientific knowledge is fully utilized for economic progress and the well-being of all residents. By gradually implementing policies consistent with Plan S by 2022, the Portuguese national funder adds another powerful European voice in favor of Open Access.

Additionally, the European Commission and the UK Research and Innovation (UKRI), two significant cOAlition S funders with multi-billion-euro annual research commitments, also announced their Plan S-aligned OA policies. Key features of both policies include no embargoes, open licenses (Creative Commons Attribution licence (CC BY) with minimal exclusions), no funding of APCs in hybrid journals, and several routes to support compliance, including adding the Author’s Accepted Manuscript in an institutional repository at publication.

Plan S aims to accelerate the shift to a scholarly publishing system that provides immediate and free online access to academic publications. The 10 principles of Plan S establish the ground rules for the transition to Open Access that all members of cOAlition S are expected to follow. 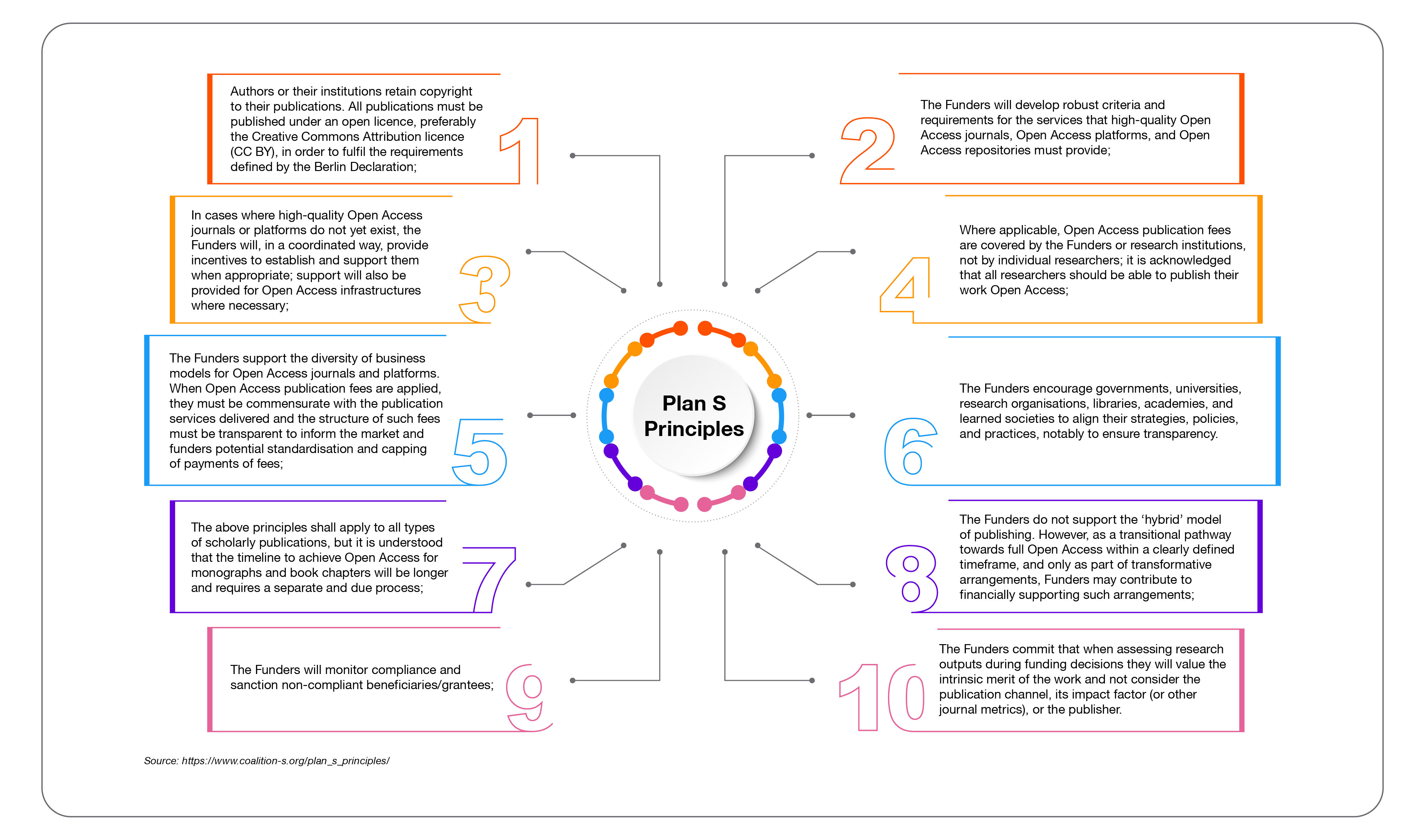 Numerous organizations, including the Wellcome Trust, the World Health Organization, the European Research Council, and the Bill & Melinda Gates Foundation, have signed on to the initiative. Implementing Plan S will result in increased visibility and impact for journals that publish exclusively in open access, increased transparency regarding APC spending, and a decrease in publishing in predatory journals. Furthermore, a free-to-read model eliminates the need for researchers to compensate publishers for hosting their articles.

It is well-known that very few publishers permit simultaneous CC-BY and zero-embargo sharing of author-accepted manuscripts (AAMs). Publishers frequently require authors to sign agreements stating that AAMs may only be shared under a more restrictive license. This has caused concern among some researchers that they will be unable to publish in subscription journals while adhering to Plan S's green OA mandate.

In July 2020, cOAlition S adopted a Rights Retention Strategy that enabled their funded researchers to publish in their preferred journals, including subscription journals, while adhering to Plan S's Open Access mandate. The Rights Retention Strategy is intended to ensure that all scholarly publications supported by cOAlition S are made open access. In practice, it allows researchers to retain enough intellectual property rights in their work to make the AAM Open Access with a CC BY license at the time of publication.

To facilitate the implementation of Plan S, cOAlition S Organizations were required to amend their grant conditions to require that all Author Accepted Manuscripts (AAMs) or Versions of Record (VoRs), reporting original research supported in whole or in part by their funding, bear a Creative Commons Attribution license (CC BY).

Impact of Plan S on the open-access movement

Despite the added complexity, advocates assert that Plan S has already sparked a shift in the OA landscape. Journals that previously refused to make peer-reviewed articles immediately open access are now doing so — albeit only for authors with Plan S funders. We are currently witnessing an explosion of experiments with open access business models.

Plan S is also putting a spotlight on the financial viability of journals, as subscription-based journals begin charging per-article fees. Pay-per-paper business models have their own drawbacks. It runs the risk of excluding researchers who lack support from funders or institutions willing to pick up the tab. Several journals are experimenting with business models that do not charge authors per paper. Numerous hybrid journals have entered into 'transformative agreements,' in which university consortia or libraries pay lump sums to cover both the cost of open access publishing and subscriptions to paywalled content. Another concept, dubbed 'subscribe to open,' involves subscription journals offering to open up their content for a particular year if all of their subscribers decide to continue paying fees.

By providing immediate and unrestricted access to cutting-edge research, we can accelerate discovery and create a more balanced system of information, data, and knowledge that is accessible to all. Journal access has long been a major concern for clinicians and practitioners, as they frequently lack the financial resources to pay for the incredibly high copyright fees. Open access publishing enables a broader audience of scholars to access and cite the work. As a result, open access has accelerated the growth of the publishing industry as a whole, rather than as a collection of distinct disciplines. One such example is Nature's "Scientific Reports," which grew exponentially in the years following its launch and is perhaps the world's largest open access journal. Similarly, PLOS ONE, an OA journal published by the Public Library of Science, had a major impact on market share for more than a decade before Scientific Reports surpassed it to become the largest megajournal.

With an ever-increasing reliance on the internet and technology, many academics believe it may be time for traditional publishing methods to fade into the background and make way for open access.

As more researchers publish peer-reviewed articles- in accordance with Plan S policies, cOAlition S continues to recruit new members and foster alignment around Plan S principles in order to expand its international and diverse footprint. Robert-Jan Smits, the founder of Plan S, calls for "leadership" from policymakers, funders, and scientists to make all publicly funded research immediately openly available, with transparency about the associated costs. As long as scientists' careers are largely determined by the journals in which they publish, and as long as scientists are not adequately compensated for their teaching, knowledge transfer to industry, commercial ideas and startups, or expertise and support to policymakers, the transition to full open access will be hard to accomplish, he says.

Smits cautions that, while Plan S has shaken the world of scientific publishing and accelerated the transition to full and immediate open access, there is "still a long way to go" before that goal is actually realized.

As a leading solutions provider to the research content industry, Straive works with leading commercial/open-access publishers, university presses, and associations offering technology, content, and workflow solutions to achieve better business outcomes. Download our whitepaper, ‘Key Aspects of Open Access’ to learn more about how you can create a strong OA strategy.