The availability of research data is essential for ensuring the reproducibility of scientific findings. In recent years, publisher’s submission requirements have encouraged data sharing in an effort to improve the transparency and quality of research reporting. Data sharing statements are now standard practice.

The scholarly publishing business has historically had a distanced connection with the data that underpin the research conclusions it publishes. Data either appeared in tables or were omitted entirely. The term "data" was not widely accepted as being appropriate for the outputs of several academic disciplines, especially those in the humanities and social sciences.

Technology began to have a significant impact on these behaviours during the twentieth century. A number of retraction and reproducibility controversies, along with the expansion of the Open Access movement to "Open Science," has encouraged scholarly publishers to re-evaluate their relationship with research data.

Sharing data is one of the cornerstones of modern science, allowing for large-scale analyses and reproducibility. Despite the fact that data sharing has improved over the past decade, and especially over the past few years, data availability and willingness to share data continue to vary widely between disciplines.

Data sharing is a scientific standard and a crucial component of research ethics across all disciplines. It is also increasingly supported by publishers, funders, and the scientific community. Researcher usage of dataset provided by other scientists is common among researchers, and nearly half of all researchers use other scientists' data¹.

Despite the fact that majority of researchers favor data sharing, scientists are concerned about the potential commercial use of their work without their assent or participation. Across all research fields, papers with available data are cited 25 percent more frequently (Colavizza, G. et al). Unfortunately, the increased citation rate has not prompted many researchers to make their data public.

For decades, researchers have adhered to the policy of keeping their data private. Others have argued that as long as the research's methodology and conclusions are transparent, reviewing the raw data is not particularly crucial. However, these notions are changing. The push for new methods of data sharing among scientists and researchers is being driven by factors like the reproducibility crisis and online access, making it simpler to view and sort data. Data journals are a new format for publishing data that is beginning to replace data repositories that have existed for some time now. 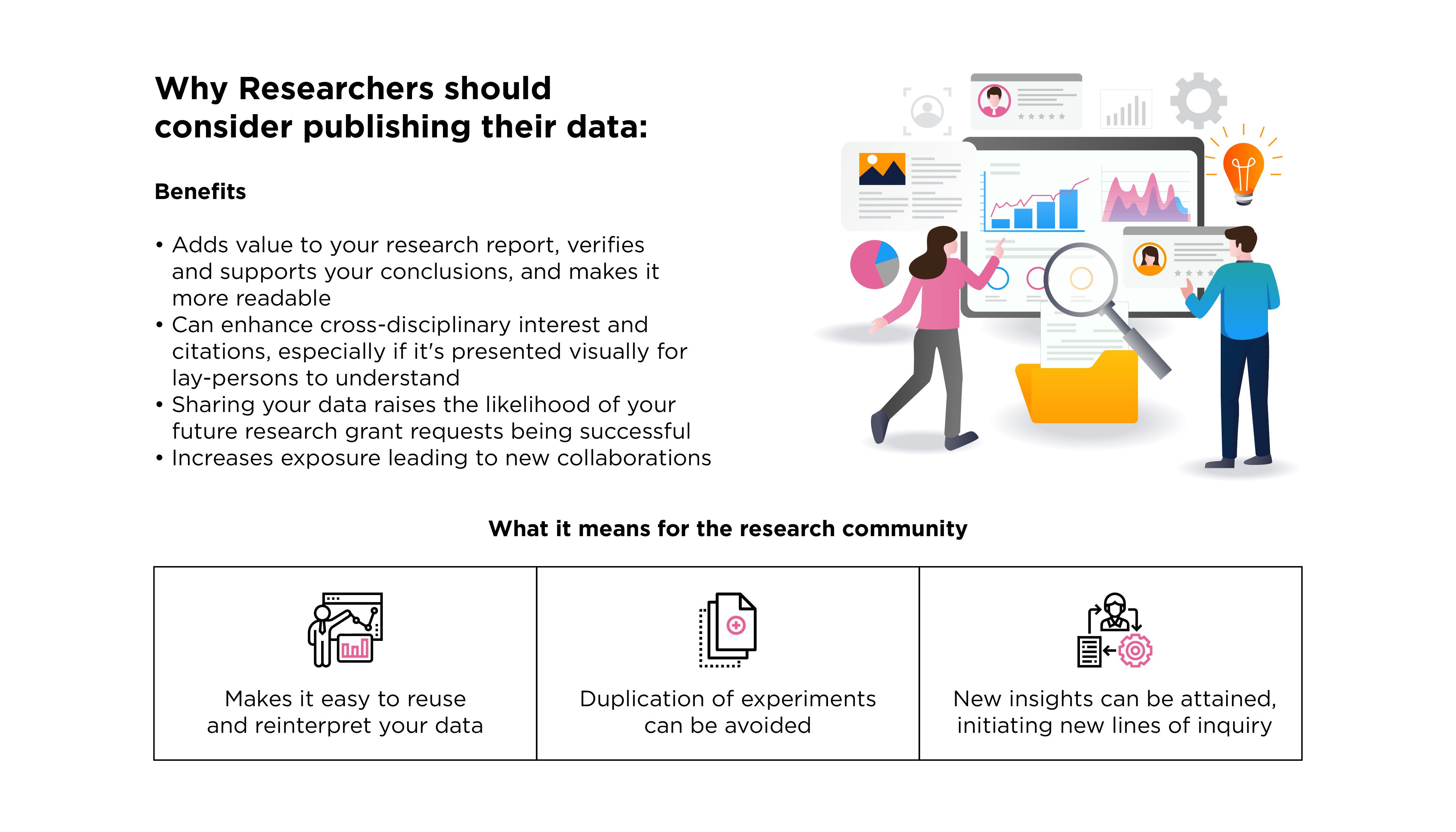 Key challenges that prevent researchers from sharing data. How to address these challenges?

Journal publishers and research grant institutions play a significant role in fostering data sharing activities by creating, adopting, and putting into practice data sharing policies. Numerous factors undermine initiatives to encourage data sharing, despite concerted efforts. These include time constraints and data theft on an individual level, lack of training in data sharing, lack of compensation, and unfavourable internal policies on an institutional level, as well as lax regulations, violations of moral and legal standards, a lack of data infrastructure, and problems with interoperability. Research stakeholders must establish strict and equitable policies, invest in infrastructure, conduct training and advocacy programs, and reward researchers who share data with citations, acknowledgement, and incentives to address these challenges.

Public Library of Science (PLOS) commissioned a survey in May-June 2020 to determine the significance of potential data-sharing barriers to researchers. The study sought to understand why best practice approaches, such as the use of data repositories, were still uncommon despite the availability of numerous solutions to facilitate data sharing. Researchers from Europe and North America were asked to rate data-sharing-related tasks based on (i) their importance and (ii) their satisfaction with their ability to perform them.

Findings revealed that despite the importance of data sharing from the researcher's perspective, researchers are content with their current capacity to share data. Therefore, arriving at the conclusion that they are unlikely to seek out new data-sharing solutions such as repositories.

The State of Open Data survey and report, which received over 21,000 responses over a six-year period, offers insightful information about the difficulties faced by researchers and their attitudes toward open data. As the largest longitudinal study and analysis of open data, it offers a comprehensive look at how researchers' relationship with open data has evolved over time.

The latest report on the survey’s findings reveals that:

Data sharing can only be successful if research stakeholders invest the same amount of effort in data management as they do in managing research publications. Publishers can probably meet these demands for data sharing by advocating for and educating the public about the value of sharing data, working to seamlessly integrate existing solutions that lessen the effort or behaviour change involved in some tasks.

However, there might be unmet researcher needs that can be satisfied in part by strengthening the data-sharing policies of journals and publishers and enhancing the discoverability of data linked to published articles.

While the availability of research data by itself does not enable reproducible research, lack of data and unsatisfactory data curation have been shown to lead to failures to reproduce results (Ioannidis et al. 2009; Hardwicke et al. 2018). In 2016, Springer Nature initiated the implementation of standardized, harmonized research data policies across its journals. Journal data sharing policies are now much more common thanks to similar initiatives that were launched by some larger journal publishers in 2017, including Elsevier, Wiley, and Taylor & Francis.

2010: Journals in ecology and evolutionary biology banded together to support a Joint Data Archiving Policy (JDAP).
2014: PLOS imposed a robust data sharing policy for all its journals.
2017: The International Committee of Medical Journal Editors (ICMJE) established a standardized data sharing policy for its member journals, which include BMJ, Lancet, JAMA and the New England Journal of Medicine.
2020: In line of its commitment to encouraging the sharing, linking, and citation of research data, STM declared 2020 as the Research Data Year, marking the beginning of a multi-year initiative to advance the sharing of research data.

Stronger data policies that demand data availability statements and author data sharing are more successful at guaranteeing that data will be available for the foreseeable future (Vasilevsky et al. 2017).

The rising demand for greater dissemination of research data is a principle of open science that can no longer be disregarded.

Some academics are driven to share and reuse research data across disciplines in order to increase transparency in scholarly inquiry and generate new knowledge from existing resources. Data reuse has been shown to speed up new discoveries, conserve valuable time and funds, and promote disciplinary progress in specific cases.

With policies mandating greater research transparency and data sharing, the scientific community is increasingly adopting this practice. However, in order to successfully build and manage data pipelines, it is essential that improved guidelines, education to manage concerns, and appropriate infrastructure be well in place.